An artist rediscovers and reconciles his painful past through art

Sayon Syprasoeuth tells the story of leaving his country and its effect on his journey into art. 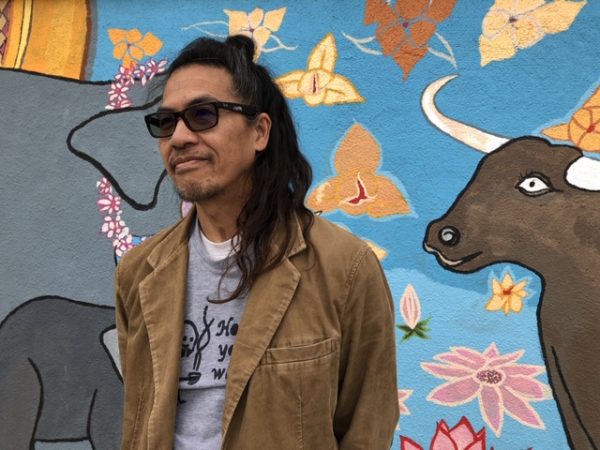 Artist Sayon Syprasoeuth stands in front of the mural “The Spirit Within” at the United Cambodian Community Center in Long Beach, California. (Photo credit: Eve Troeh)

Sayon Syprasoeuth arrived in the U.S in March 1980, late on a winter’s night. From the hot and tropical climate of a refugee camp in Thailand, his family of nine had taken a plane and landed in a small town in Iowa blanketed with snow. He woke up in the backseat of a car.

“I remember looking out the window and I remember seeing these yellowish brown streetlights and seeing the snow dancing in the air … it was just like a fairyland to me.”

Syprasoeuth and his family had escaped civil war in Cambodia, where they’d fled to a refugee camp across the border in Thailand. There, they’d awaited a sponsor – a person or organization to bring them to a new nation and new home. That came in the form of a Lutheran church, and the family resettled in tiny Elkader, Iowa. The contrast between the old life and the new was jarring.

“Here I was coming from a refugee camp. We just had a tin roof, and we were sleeping on cots or on the floor just like animals,” Syprasoeuth said. “We went into this huge brick home. Everything was so well-manicured, with the streets and the homes and the trees.”

All at once, Syprasoeuth was met with stability and comfort, joining small town life in America. But all the luxuries in the world would not be a substitute for something he would come to realize he needed: to process the personal and community trauma of war.

“I don’t ever recall that there was any time as a youth that I had any reference to trauma. It was almost like ‘let’s forget about this and continue on with this new life you have,’” he said.

After living in Iowa for about two years, the family headed to California for a warmer climate. A relative was living in Torrance; Syprasoeuth’s family moved to nearby Long Beach.

As an adult, Syprasoeuth pursued higher education via community college. He said he wanted to please his parents, who preferred he study something practical, and he contemplated going into the medical field. He struggled to choose a career path.

“Multiple times I went to visit my counselor. He just said, ‘You just have to follow where your passions lie.’ I really decided it’s in the arts.”

He studied studio art at Cal State Long Beach and then Claremont College. He’s the first in his family to finish college.

Syprasoeuth showed talent and saw the power of art at an early age. He traces his interest back to a moment at the Thai refugee camp.

“I was cutting up these plastic figures, and using that as a shadow puppet. And then I cut up another piece of plastic behind it. So the light from behind kind of cast the shadows into the plastic screen, and they made this kind of movie looking thing. And this kid who was younger than me was just so mesmerized. And then for a moment I felt like: wow I actually have something to contribute.”

As a trained artist, Syprasoeuth said he at first assumed that rush of influencing people meant seeking fame. “A lot of the times we see these famous artists out there and it’s something that we want to duplicate,” he said. 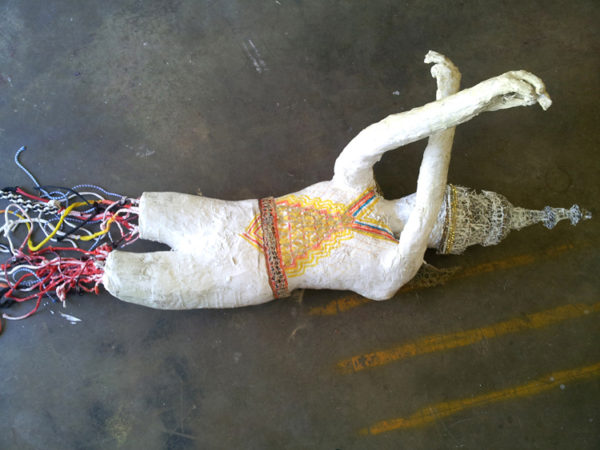 The mixed media sculpture “Falling Down” in the figure of the Cambodian Apsara dancer references the landmine crisis in post-war Cambodia. (Photo provided by Sayon Syprasoeuth)

But many years into his career, Syprasoeuth shifted his artistic focus. He began to deepen his involvement with the Cambodian community through the Long Beach United Cambodian Community Center, a non-profit organization in the heart of the largest Cambodian population in the U.S. His work includes working with the elderly and youth.

“Working with elderly folks that are survivors of the war. I’m really sad to see the trauma, the physical and emotional wounds that they still carry. It makes me even more driven to continue the work that I do,” he said.

Within the center, Syprasoeuth curated a collection of art within the hallways of the offices. He calls it the Camtown Art Gallery, and he sees the project as a way to give voice to the young Cambodian community and people of color, encouraging them to express themselves through art. The art gallery gives young artists the opportunity to display their work for the public, and even make it available for sale.

“I feel like now I have a more personal drive to make my work but make it more personal and still impact the people that have gone through these traumas in their lives,” Syprasoeuth said. “And hopefully it’s beneficial.” 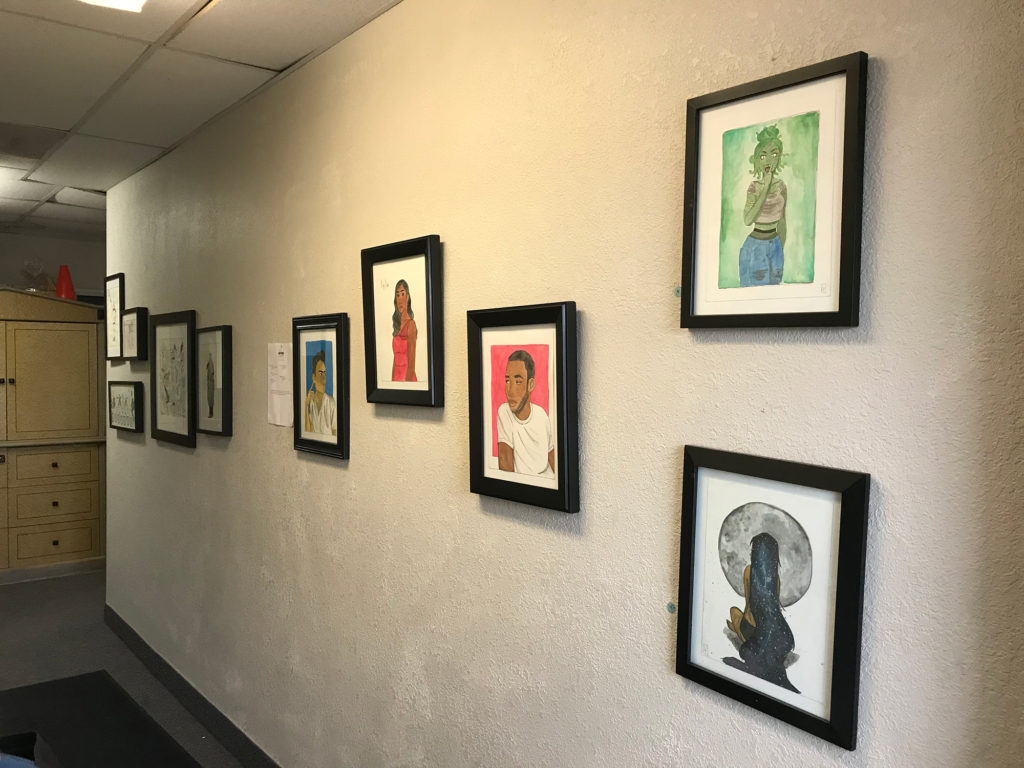