A DREAMer reflects on both sides of his hyphenated life 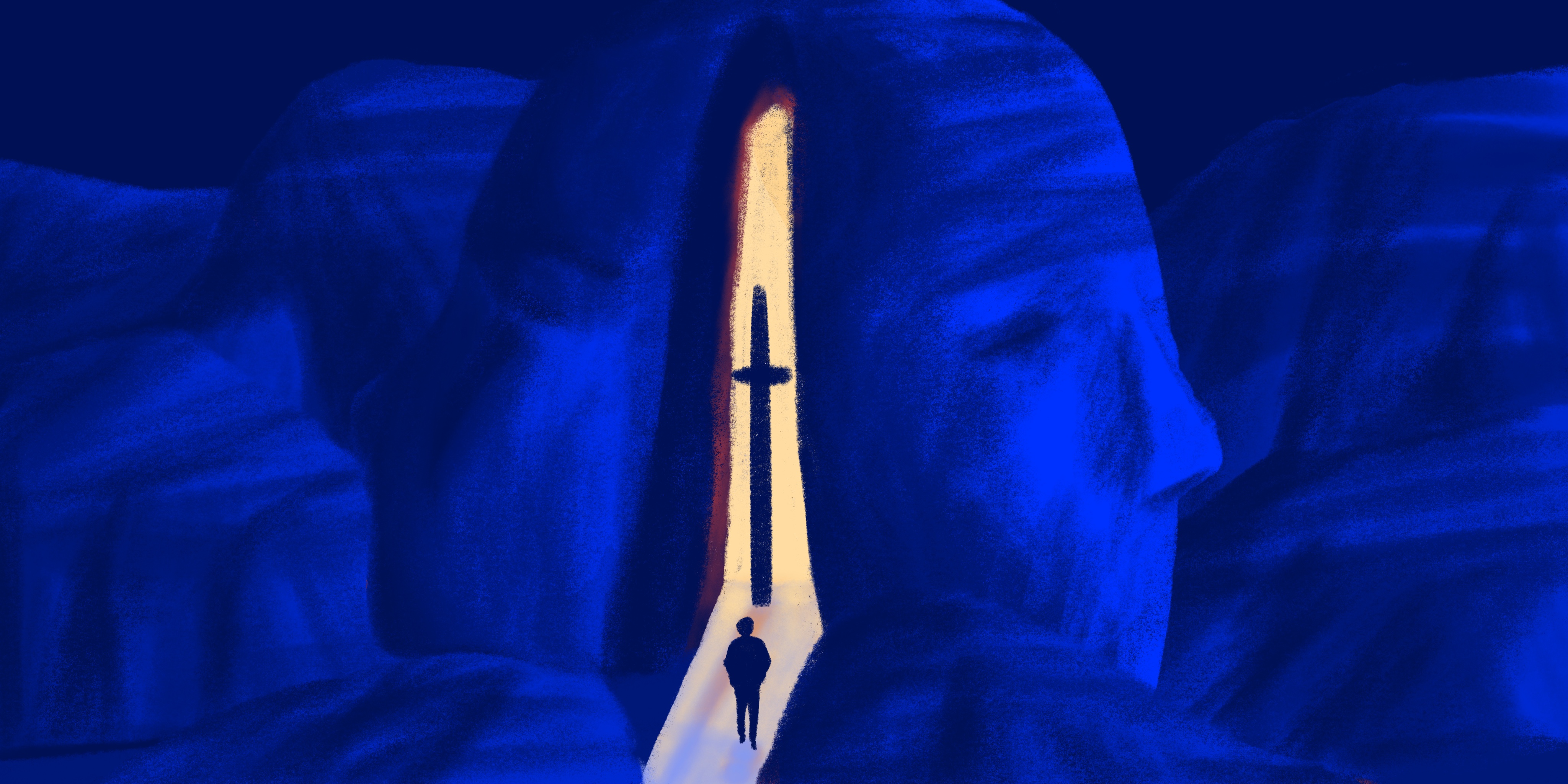 Hyun-Gyum Shin talks about his early childhood adjusting to life in America, coming to terms with his identity, and finding a community.

Hyun-Gyum Shin often got in trouble in elementary school. “I kept pulling people’s hair because they’re all blond and I was the only kid with black hair,” Shin said.

It was 1997, and he was in a small Louisiana town roughly 240 miles away from New Orleans. Shin had just recently arrived with his older brother to live with their grandparents. To their knowledge, he and his brother were the only Asian kids in school. 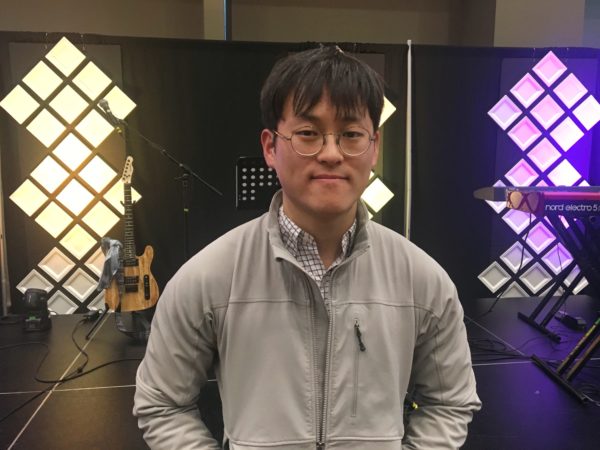 Hyun-Gyum Shin stands in front of the Gracepoint’s stage after church service. They set up and tear down the stage on Sundays at the UCLA Palisades Room. (Photo credit: Megan Manata)

Shin lived there for one year before moving back to Seoul, South Korea, where he was born. Four years later, he returned to America, this time with his parents, who relocated the family to Los Angeles, which is where his grandparents had moved for retirement.

In Los Angeles, Shin’s family joined the United States’ largest Korean-American community. There are more than 330,000 people who identify as a Korean living in the metropolitan area of LA — more than anywhere else in the nation.

While many people decide to emigrate and make a country like America their new home, for many others, the choice is made for them at a young age.

Shin is also one of more than 800,000 young people living the U.S. without authorization who received temporary protection from deportation under the program known as DACA (Deferred Action for Childhood Arrivals). Many of the so-called “DREAMers” who qualified for DACA have been worried about “coming out” after the Trump organization announced plans to scrap the program.

But for Shin, reckoning with his identity as a Korean-American began long before DACA’s future was uncertain.

As a child, Shin zig-zagged between America and his birthplace a few times, first in 1997 to Leesville, Louisiana, where he and his older brother moved in with their maternal grandparents.

His grandparents came to the U.S to lead a Korean Presbyterian Church, which served the town’s small Korean community. Shin and his brother were both sent over by their parents to live with them.

Once he arrived and started school, he felt as though him and his brother were the only Asian children in the school system.

“I thought it was so fascinating because I grew up surrounded by black hair and then all of a sudden there’s all this blond hair,” Shin said.

He found himself during that year having a difficult time connecting to his young classmates.

“I guess I was bullied a little bit,” Shin said. “So then my grandparents took me to Walmart and bought me a cool G,I. Joe tank and then I was the coolest kid in class.”

Immersed in English at such a young age caused him to mix up both English and Korean. He spoke what he called “Konglish.”

He’d combine phrases like “give me” with their Korean counterpart — “jwo.” Instead of saying one or the other, Shin would walk around asking people to “gimme-jwo”, — which means “give me-give me” in two languages.

“I didn’t know which was English and which was Korean,” Shin said.

But after about a year of acclimating to their new home, Shin and his brother moved back to South Korea while he father started a business in Pocheon, a small rural city roughly 26 miles north of Seoul.

Then in 2001, the entire family decided to move together to Los Angeles.

During his first year in his new elementary school, Shin had a difficult time making friends. His teacher paired him up with a Korean-American boy named Edward. The teacher believed that Edward would translate for Shin, but Edward did not speak any Korean, leaving Shin feeling betrayed and alone.

Through his struggles, Shin’s parents threw him his first American-style birthday party. His mother tried to make his party as American-friendly as possible.

“She knows I like American food… so she ordered a bunch of pizza from Pizza Hut,” Shin said.

Slowly he felt himself integrating into American culture. He ran for treasurer in fifth grade and won.

“It was really empowering,” Shin said.

Relationships with his peers improved; even Edward became a close friend.

As he got older, he became an  “older brother” to other newly immigrated Korean kids, often translating schoolyard games for them.

“He emphasized to us the importance of grasping our hyphenated identity,” Shin said. “You are truly Korean, but you are also truly American, but then that puts you in this hybrid position where you are never fully Korean or fully American, but that’s fine.”

Shin said he took a few years to understand what this hyphenated duality meant, but once he did, he found personal truth to it.

“I think that the beauty of America is that you’re able to maintain your own cultural identity, but somehow it gets blended with the American culture.”

His family moved to Los Angeles through an invitation from his maternal grandparents to join them.

At their suggestion, Shin’s parents hired an immigration attorney — and paid them a substantial sum. But the attorney never completed their paperwork.

By the time his parents had discovered the fraud, Shin said the attorney left town with his parents’ money — and their paperwork had expired.

Still, the subject of his immigration status wasn’t discussed in his household; Shin describes the subject as taboo. He  found out he wasn’t a U.S. citizen when his older brother applied for college financial aid. He says neither his brother or him knew they weren’t American citizens.

Shin believed that if he just told admission officers his story, colleges would admit him. In the end schools like William and Mary and Hamilton College either couldn’t accept him because of his immigration status or couldn’t provide him financial aid because of his status.

UCLA ultimately accepted him. After graduating, Shin started working at a financial analyst at PricewaterhouseCoopers, the global auditing and consulting firm. But soon after he started, the Trump administration announced plans to end DACA, causing panic among recipients.

Shin’s coworker at PwC tried to make plans to move him to another office in case he was deported.

“Whatever country you want to you end up deciding to go, we have we probably have an office there,” Shin said about his conversation with his coworker.

But when she pressed him for a decision, Shin told her, “America! I grew up here! Like, what do you what do you mean?” Shin said.

He came to realize that America is his true home.

“It was hard for me to just abandon that identity simply because I didn’t have paperwork,” Shin said.

Because of his immigration status, he has not been able to leave the country due to a lack of a passport.

His paternal grandmother passed away in Korea, and he could not attend her funeral.

Humbled by everything that had happened in his life, he has found himself turning more toward  Christianity.

“So for me,” Shin said, “my identity, my strongest identity is not in Korean American or I work at PwC, or I’m at UCLA grad, is my identity as a Christian, and that means that I you know, try to do my best to love other people as well as I love God.”